Chobe National Park- Today we go on safari again! Let’s go on a safari in the Chobe National Park! We really want. The safari of the Kruger National Park we liked a lot and we could see the big 5. This is why our expectations for the river safari and today’s 4 × 4 in Botswana are very high.

Travel from Zimbabwe to Botswana by road 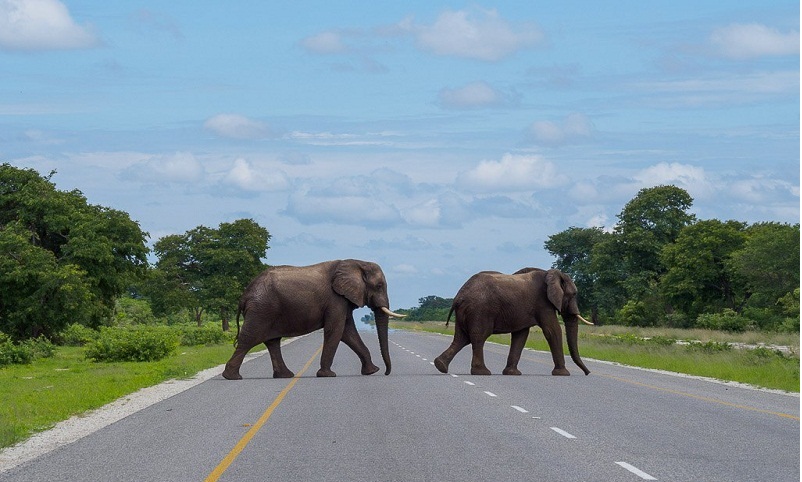 We get up very early and at 7 o’clock in the morning we are ready to start the trip from Zimbabwe to Botswana. We got into the van and greeted the family that is already inside. 5 minutes later we already thought, what a trip we are waiting for! It is a family with 3 children, but one of them seems to have been given a language for breakfast.

After several kilometers we reached the border between Zimbabwe and Botswana. 15 minutes of queue to enter the Zimbabwe house. They put a stamp on us as we leave the country and before leaving Zimbabwe we get our shoes through a liquid. This prevents you from entering Botswana spores or other organisms hooked on the sole of your shoes.

We are already in the car again. 2 minutes pass and we stop. We have arrived at the Botswana booth. 15 more minutes of waiting, another stamp in the passport and ready to go to Chobe. If you want to know more about if they are necessary. Or which are the best visas you can check the entrance: visas for South Africa, Zimbabwe and Botswana .

We arrived in Botswana

We arrived at the  Chobe Marina Lodge , in Kasane. It is a lodge that looks very good. We sign it for when we return to Botswana. From here comes the safari on the Chobe river. What a win! Yesterday we took a boat to watch the sunset on the Zambezi River. What a sunset! If you go to Zimbabwe try to catch a boat to see it. Apart from the sunset we saw some hippopotamus.

We got on the boat and at 5 minutes we see the first crocodile. Dad, is he dead? A girl asks her father. It is a very beautiful animal and certainly a survivor. They say it is one of the animals closest to dinosaurs. Although it is one of the most boring animals we saw in the safari in the Chobe National Park. They looked like statues. This is because they have to spend hours in the sun to maintain the temperature of their body. They are not like us or other animals. Reptiles are poikilotherms and need heat sources to maintain body temperature.

A family of warthogs goes to the river to drink. They are not like the ones we have here. It is the pumba of the Lion King, but in ugly version. If you do not believe me, judge yourselves.

We started to suffer a little for them . Have they seen the crocodile? Has the crocodile seen them and will they be hungry? Hopefully not. Luckily it does not end in tragedy.

We continue navigating the river and we see a herd of buffalo. It seems that in this safari we will see bigger herds of animals. In the Kruger Park or were individuals loose or 4 or 5. Except the impalas. That there were many and everywhere. 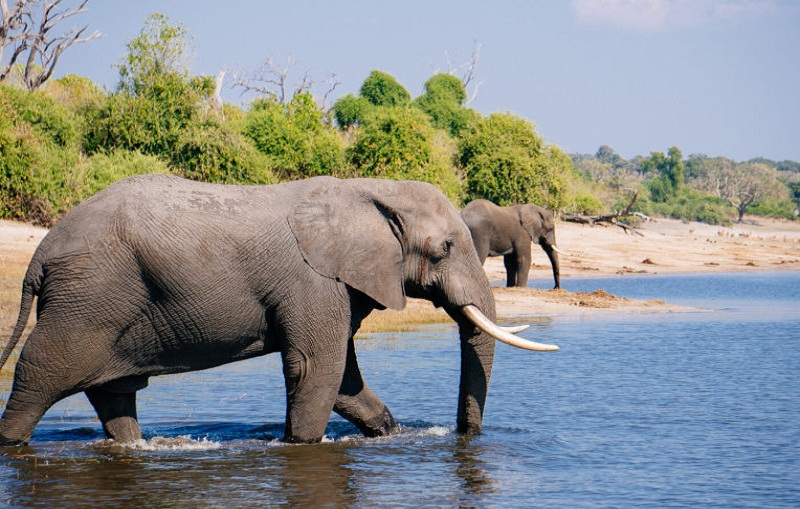 Near the shore we see how hippos look out to breathe and also a lone elephant. We approached him trying not to disturb and we followed him for a while. A group of 10 elephants are approaching with babies that are drinking in the river. What a beautiful picture! We can not stop looking at them. Or immortalizing the moment. Suddenly it seems that they want to go deeper into the river. One takes the first step and very slowly seems to be encouraged to cross the river. Little by little. The rest of the elephants are following him.

The guide tells us to enjoy the moment and take lots of pictures. Seldom can you see this moment. Some submerge completely but we do not lose track of them because the trunk betrays them. As they reach the other shore some of them throw themselves on the ground to cover their skin. This is how they protect themselves from the sun and high temperatures.

Stop to eat at the Lodge 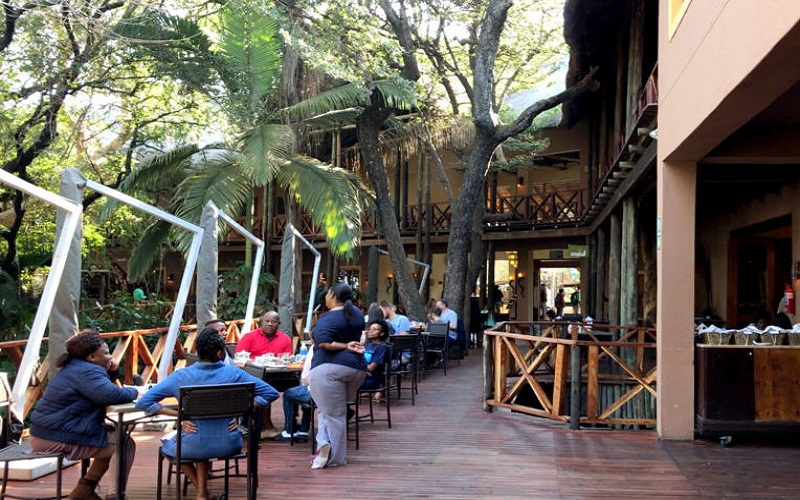 We stopped to eat at the lodge. A free buffet with very good meats. The drinks do not enter. As in most buffets. David, before asking for drinks ask the prices. They had warned us of the exorbitant prices. And we wanted to know before ordering it if we were willing to pay it. The waiter tells him that a Coca Cola costs $ 3. We will share one and one water.

When we finish eating, he brings us the bill. David takes it and suddenly turns white. David, what’s wrong? I pass the bill and I see that it puts 21 on the line of Coca Cola. $ 21? We are crazy? We called the waiter and asked him. Was not $ 3 the Coca Cola? He says yes, it’s $ 3 and laughing tells us that the account is not in dollars. It is in Pulas, the local currency of Botswana. What a shock we have stuck!

Safari in the Chobe National Park, this time in 4 × 4

It’s time to start the safari in Chobe National Park 4 × 4. We arrived punctually and there are already people in the cars. To a family of Spaniards. And to us it is our turn to share a car with the American family whose daughter did not stop shouting in the transfer from Zimbabwe to Botswana.

None of us want to go with them and we decided to say that we are a group of Spaniards and we do not want to be separated. Those who organize it tell us that if we want to go in a private car we pay for a private one. Sorry? We have hired a safari to be able to see animals calmly. Not to see no animals because there are children who with their screams chase them away.

After much struggle and refusing to climb the 4 × 4 of the Americans find us a solution. We will go the 6 in another 4×4 with the Mexicans and with a couple of other people. “The problem” is that someone has to go ahead with the ranger. Is this really the problem? We climbed enchanted to 4 × 4.

We finally started the safari … 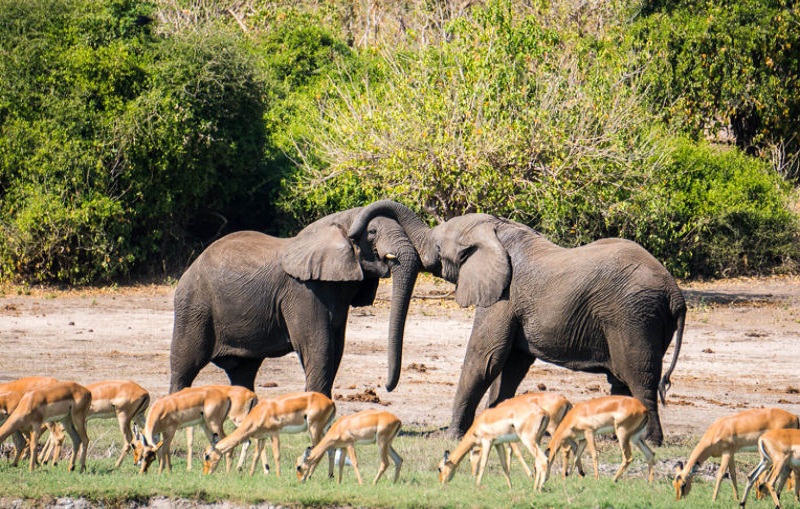 Unlike the Kruger Safari, this one is wilder. Put it in some way. You do not go by paved roads. But by sandy roads. As the ranger said, they give you the famous African massage. We did not stop bouncing!

It’s 3:00. An awful hour to do a safari in the Chobe National Park if you want to see the big predators. The lions sleep about 20 hours a day and only 4 hours are dedicated to hunting. With the heat that makes sure that they will not go hunting.

A rest area in the middle of the park?

We stopped at a rest area. It also has nothing to do with Kruger. In Kruger it was a fenced area, with cafeteria, bathrooms. This one is not. It is an area with a sign and a tree. Get off the 4 × 4 here, is it safe? I do not know. The ranger offers us drinks. With the heat that anyone does, he says no. We got off the 4 × 4 but did not get too far. We do not want to be anyone’s dessert😂

We continue looking for the lion or the leopard

The ranger receives a warning. Will it be a lion? Maybe a leopard? While we go to the point that they have told you. We are all very excited. And with the cameras ready. When we arrive, disappointment arrives. They are four zebras. They are very nice, but it is not what we expected.

The safari is over and the same ranger takes us to the border. We line up to get the exit stamp from Botswana. When we go to the car that will take us to Zimbabwe. We hear a small explosion. What happens? A tire has burst. We got into the car and continued.

Remember to look at the necessary visas . We did not have to pay because when we first entered Zimbabwe we bought a visa for going to Chobe National Park  that allowed us to leave. And enter Zimbabwe and Zambia as many times as we wanted for 90 days.