Spain is the country with the most blue flag beaches . The north, south, east and west, no matter where you look because there will be a blue badge that recognizes the excellence of Spanish beaches. As every year, thousands of kilometers of Spanish coast have been awarded with the blue flag that rewards good environmental conditions. And the facilities of European beaches. And one more year we are leaders.

Spanish beaches with blue flag 2019, the best coves to go on vacation 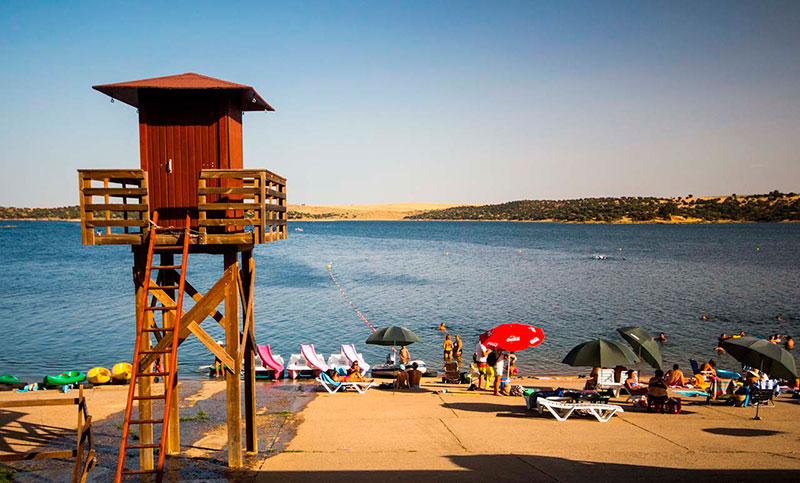 Top a ranking when the news behind is positive, it’s great. Being the first year, is better still. With 696 awards, Spain is the country in the world that has the most blue flags and is closely following holidays in Greece , France, Turkey, Italy and Portugal. If this summer you plan to visit the most beautiful beaches , we recommend a dozen Spanish beaches with blue flag that you will love.

Antilla Island, Huelva, one more year one of the best beaches in Andalusia

Between Isla Cristina and Lepe you will find this kilometer and a half beach, fine sand and open to the sea where the sun always shines. With complete services that include bathrooms, hammocks, sailing school. It is perfect if you are looking for a destination in which to spend a few days with the family, resting. And with half a dozen magazines in the backpack. Relaxation in the best beaches of Andalusia is possible in this corner of Huelva.

Near the beach, in addition to nature, you will find the Occidental Isla Cristina hotel, another oasis facing the sea ideal for your family holidays . When you want to change the salt water for the sweet, bathe in any of the two huge pools that are surrounded by bars, umbrellas and terraces. Right in front of one of the best Spanish beaches with blue flag.

Playa de La Barrosa, Cádiz, among the most beautiful beaches in Spain

La Barrosa beach is one of the Cadiz beach par excellence. And as a famous soda ad said a few years ago. It’s for those who want to go to the beach bar, for those who seek to enter nirvana mode, for surfers, for those who yearn to feel nature … for all. Because if something can boast this beach of almost six kilometers is impeccable care, which makes it perfect look what you seek.

And what has the south, besides the sun, good beaches and a special character? One of the best fish in Spain. Do not miss the gastronomic experience of the Atunante restaurant, at the Royal Hideaway Sancti Petri hotel.  At the foot of La Barrosa, one of the most charming Spanish blue flag beaches. The Tuna’s specialty is the red tuna from Almadraba, which is a real delicacy.

Cala Ferrera, one of the best coves in Mallorca

Until you travel to the Balearic Islands you will not know some of the most beautiful shades of blue. And its beaches and coves have a tonality that seems impossible and invites the bathroom like no other. The beaches of Mallorca can boast of its fine white sand, crystal clear waters and a perfect temperature to enjoy in the water as long as you want. That’s right, Cala Ferrera, a sandy area located between cliffs where bathers also anchor boats and which is also listed among the best Spanish beaches with blue flag.

If, in addition, you are staying at the Barcelo Ponent Playa hotel you will not need to take your car. Or motorbike to get to this cove. You will have it at your feet and you can even see it from the balcony of your room. You can also bathe in the pool or play sports inside or outside the hotel. You’re the boss.

Cap Blanch, Alicante, in the ranking of the most beautiful beaches in Spain 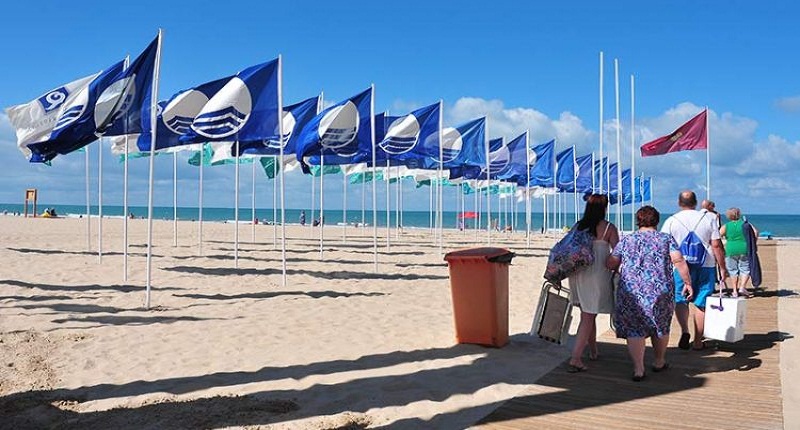 It is not one of the busiest Spanish beaches with blue flag, which adds points. Of almost a kilometer long. Its waters are temperate and instead of sand it is made of small stones. Of course, it has all the services: showers, baths and even a promenade to walk and stretch your legs.

If you stay at the Asia Gardens Hotel & Thai Spa, at the Royal Hideaway Hotel, getting here is an excursion, which is certainly worth it. After spending the day at the beach and having an ice cream in the town of Altea – white, charming despite its slopes and facing the sea – you can make a technical stop at the hotel spa, one of those places you would never want to go out.

Torvistas, one of the best beaches in Tenerife

This beach is, of course, in the Canary Islands, a destination that could not be absent from this list. To the south of the island is this piece of fine sand and calm waves. Whether you want to dive or rent a hammock you can do it, as it is fully prepared to welcome tourists.

Ten minutes from this beach, at the Royal Hideaway Corales Suites will welcome you with open arms in a newly opened five-star hotel with an incredible architectural design, inspired by the corals of Tenerife.

Agua Amarga, between the charming beaches and blue flag of Almeria 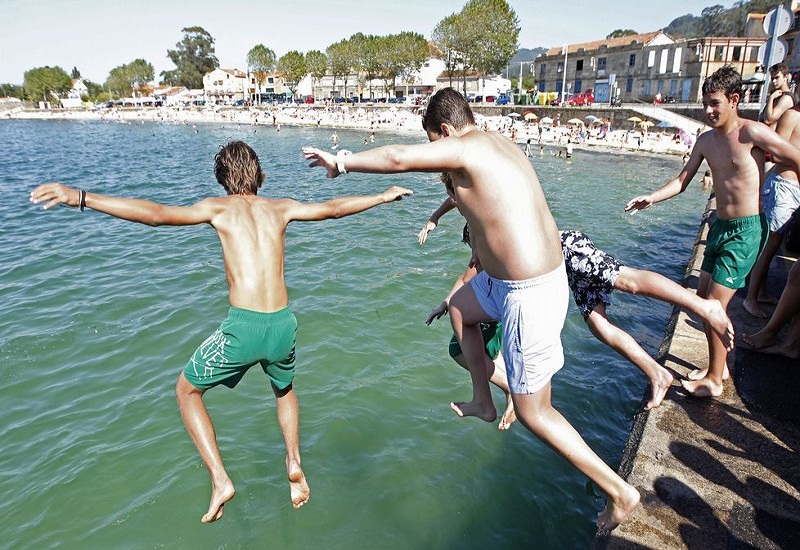 The Almerian coast is dotted with coves and beaches that deserve the full medal count, however, the accessibility to many of them is not as simple as claimed by the body that gives the blue flags. One that meets all the requirements is this, in Níjar, another of the Spanish beaches with blue flag. Urban, it’s worth going early to get a good site. And if we look at the history we must bear in mind that south of the beach is the fortified farmhouse of the Rambla del Plomo, built in the seventeenth century to protect the peasants from attacks by pirates.

No less than 30 blue flags wave in Almería, so if you want to visit more than one beach we recommend you set up your base camp in a hotel and from there, make excursions. If you travel with your family, the Barceló Cabo de Gata , with direct access to the Natural Park, is a great option. Its rooms are spacious, surrounded by nature and, if you want, you can enjoy the program ‘All inclusive’.

Corint, one of the quietest beaches in Valencia with blue flag 2019

Another Spanish beach with a blue flag and a lot of charm is very close to Valencia, in Sagunto, and it is not one of the busiest. But it is one of the most natural. Quiet and closed, its sand is thick, exceeds two kilometers long and also, in certain areas you can practice nudism.

If you want to sleep in the capital of the Turia, do not hesitate: the hotel Barcelo Valencia , next to the City of Arts and Sciences. And therefore very close to the port and the beach of Malvarrosa, is the option. Modern and design, you will also like its terrace with pool.

La Victoria, in the ranking of best beaches in Cadiz

With its 3 kilometers in length, it is considered as the best urban beach in Europe. Frequented mostly by locals, is next to the promenade, full of restaurants where you can taste a delicious fried fish. In addition, you can have a cocktail both during the day. At the beach bars, and at night, because it is surrounded by pubs with a lot of atmosphere.

At 100 meters from the Victoria is the hotel Occidental Cadiz. Urban, but almost on foot of the beach, it has almost a hundred spacious and bright rooms in which to rest between start and finish. And in case, besides beach you want to know the city, the town center is only 15 minutes walk.

Maspalomas, one of the best beaches in the Canary Islands, awarded once again with a zul flag

Its huge dune field and the old lighthouse that watches over the sea are part of this beach in the south of Gran Canaria with three kilometers of golden sand and few waves. Divided into several sections, you can play sports, practice nudism or party.

Right here, and also close to English beach, you can stay at Occidental Margaritas hotel. You will have all the tourist and gastronomic offer at your fingertips. As well as two swimming pools for the elderly, and two for children, where you can relax.

Arenal Gran de Portinatx, one of the best coves in Ibiza and one of those charming beaches in Spain 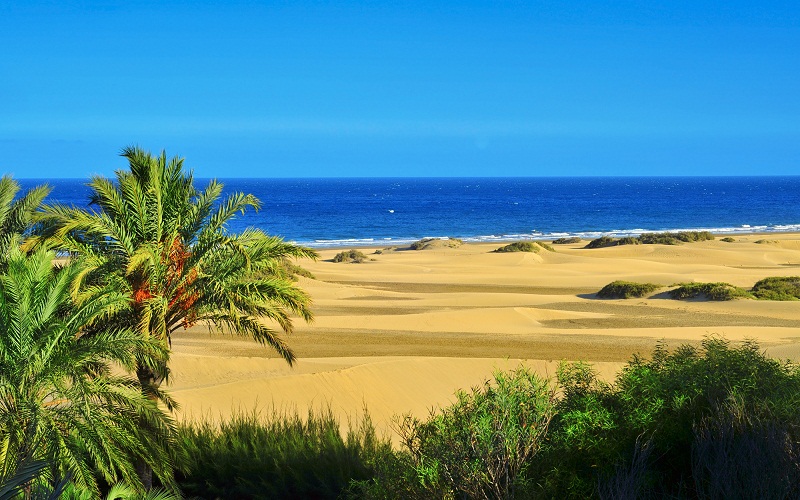 As its name suggests, it is part of one of the main tourist areas of Ibiza, Portinatx. It is one of the largest coves with 120 meters long by 50 wide and its crystal clear water makes it perfect for diving or snorkeling. In addition, from here you can visit his little brother, the Arenal Petit, just 50 meters away.

Very close to the coves you have a surprise. At the Beach Club of the Barcelo Portinatx hotel you will taste the best cocktails on the beach. For adults only, half of its rooms have sea views and thanks to its relaxed atmosphere you will return home as good as new.

Be the first to comment on "Best beaches with the blue flag of Spain, with which one do you stay?"