For those of you who plan to visit this beautiful city, New Orleans, a good option to arrive from Europe is to travel by plane. New Orleans has the largest airport in the state of Louisiana, the ” Louis Armstrong International Airport ” located 10 miles (17km) from the city center.

Where to stay in new Orleans?

To get from the airport there are a lot of options: From taxis, this service is around $ 49, like the bus service, with a cost of $ 2 with the company Jefferson Transit.

The Tiger Airport Shuttle company has a minibus service to and from Baton Rouge. There is also a limousine service in the baggage claim area (rates from $ 58 dollars for 1 or 2 passengers). There are car rental counters from the most recognized companies in the lower level of the terminal building. 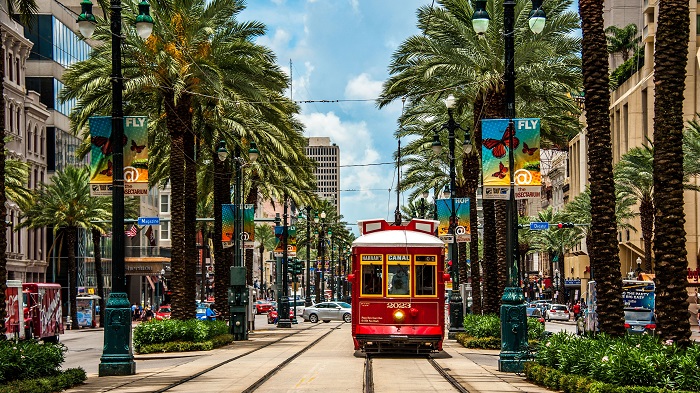 How to get around New Orleans?

New Orleans is a big city but very well connected, it has many public transport services, as well as a great offer of taxis.

So there is no problem when getting around since they have several options available, and the bus is a good way to do it, at a cost of $ 2 per trip. A good idea to guarantee full freedom of mobility around the city is to consider renting a car.

The tram is an easy way to get around and a very good system for sightseeing. It gives you good views of the city, it is a bit slower than the bus system.

The bike rental is very typical to practice tourism. It gives you good views of the city without limitations in relation to parking, it is not as expensive as car rental.

What to do in New Orleans?

Once in the city and when they have settled in, they will most likely want to visit it and get to know it a little more. Now we are going to explain a little the tourist attractions that are currently available to enjoy this wonderful city:

Bourbon Street – It is the best-known street in the French Quarter, it offers you a great variety of sounds, smells. It is especially recommended to visit it on weekends. There is everything, in this street, you can find from music clubs, restaurants and jazz clubs. Bourbon Street is a pedestrian every night.

The French Market – It is close to the ” Cafe Du Monde “, a cafe that is not to be missed. The French Market is an open-air market with food and street vendors, offering merchandise related to New Orleans, a perfect place to buy typical souvenirs of the city. In this area, you can find souvenirs much cheaper than in the shops in the city. There are also jewelry, photography and craft stalls for sale.

Preservation hall – It is the most famous jazz club in New Orleans, it is located in a small place in the French Quarter, at 726 St Peter Street. The local orchestra plays late. Visitors listen to the music standing in the room, it is a very good experience for jazz lovers. Alcoholic beverages are not served at this location.

The St. Charles Street Tram – The history of these vehicles dates back to the first decades of the 20th century and the city preserves them in their original state. Trams are an easy way to get from the French Quarter to the Garden District. The round trip can take an hour and a half, but it is one of the best ways to see the mansions of the Garden District.

The St. Louis Cemetery – Curiously, it is the seat of the tomb of voodoo priestess Marie Laveau, the second most visited tomb in the United States, making it a great tourist attraction. The San Luis Cemetery also houses some impressive mausoleums and sculptures, some of them infamous for serving as scenes for scenes from the 1970s movie Easy Rider.

Audubon Aquarium of the Am é rich – This aquarium is located in front of the Mississipi River. It is the aquarium with the largest and most varied collection of sharks in the United States. The aquarium also offers interactive exhibits with tropical birds, turtles, and a butterfly garden.

Garden district – In this residential area you will find examples of traditional southern mansions, some of them owned by celebrities such as writer Ann Rice, actors like Sandra Bullock and Nicholas Cage, and sports figures like Archie Manning, father of soccer stars American Peyton and Eli Manning.

Nueva Orleans has very varied gastronomy, if you are a more or less curious person, at lunchtime, we recommend that you try the traditional food of the area, the famous southern food, based on many dishes, beyond what officially known as, meat, seafood and rice.

Gumbo: The Gumbo is made mainly of broth and rice, with various added ingredients (prawns, crab, chicken …), it is a kind of very dense stew.

Beignets: The Beignets is the typical New Orleans sweet, especially from Café du Monde. Flavored donut or donut, but rectangular and full of sugar “glacée”, delicious, you can not miss it.

Po-Boys: They are the sandwiches, usually large, of any type (meat or seafood) inside. It costs about $ 10-15 and is found in any bar or restaurant.

Where can you stay in New Orleans?

If you want to stay in the central business district, you should be aware that prices range from $ 440-160 a night. It is a very well located district with great ease, both for arrival from the airport and for internal mobility in the city, near the Mississippi River. Featured hotels in this area are The JW Marriott New Orleans, 5-star hotel, Comfort Inn & Suites Downtown New Orleans, among many others.

Warehouse District is the art district, very well located and close to the French Quarter. With a great cultural movement both in relation to the music scene and in all other artistic levels. It is a very well connected area equipped with everything you need. Hotel prices are around $ 230-82 per night. Featured hotels in this area are The Hotel Modern New Orleans Three stars, Residence Inn New Orleans Downtown Three stars, among many other hotels in the district.

The Garden District is the most exclusive area of ​​the city, starting from this, also the most expensive area in New Orleans, endowed with all kinds of luxuries. Prices are around 480-200 $ a night. Hotels such as Maison St. Charles Quality Inn & Suites, Hotel Indigo NEW ORLEANS GARDEN DISTRICT, Royal Sonesta Hotel, among other hotels in this exclusive area stand out in this area.

Renting an apartment may be a much cheaper option, if you plan to spend more time in New Orleans, the apartments are around $ 1,200-530 a month. It really is an idea to consider if you intend to spend a longer season, or in the case of going with family or friends.