Located on the shores of Lake Erie, Cleveland has developed into a popular tourist destination with professional sports teams and many cultural attractions, not least the Rock and Roll Hall of Fame. The city also has some unique areas to explore. Including the Historic Gateway District, which has seen ongoing restoration. And the Historic Warehouse District which showcases some of the city’s interesting architecture.

Cincinnati is one of the largest cities in Ohio and home to a number of important cultural institutions and interesting sites. In the summer, Fountain Square becomes an outdoor meeting point for residents and visitors. Year-round attractions include numerous museums and galleries and the lovely gardens of the Krohn Conservatory.

As the state capital, Columbus contains some of Ohio’s most important institutions and buildings, including the Statehouse. The Science and Industry Center is one of the city’s most important attractions. But perhaps the most interesting and unique site is the Topiary Garden. In the surrounding area are numerous prehistoric Indian mounds.

Dayton is an important city in the history of flight. Today it housed the Wright brothers, houses the impressive Air Force Museum and Aviation Heritage Park. This is the oldest and largest military aviation museum, with over 200 aircraft and missiles including a Wright Flyer and the Apollo 15 spacecraft. Nearby is a monument to the Wright brothers. The Wright brothers’ bicycle factory, one of their planes, covered wagons and log cabins of the first settlers are reproduced in the Carillon Historic Park. There are numerous relics and documents about the Wright brothers in the Old Courthouse in Dayton. 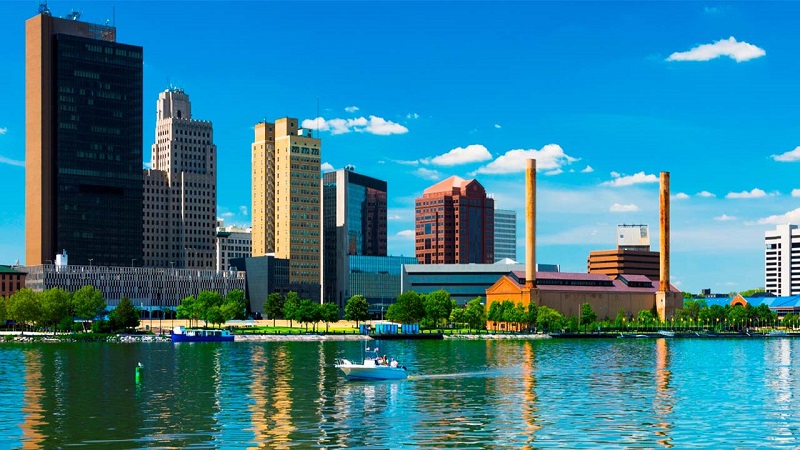 Toledo has numerous attractions that are worth exploring. Some of the highlights include the African Safari Wildlife Park, the Butterfly House, the historic West End with old Victorian houses, the Merry-Go-Round Museum, and the Toledo Museum of Art. Of particular note is the stunning Toledo Zoo. Although it opened in the early 1900s, the zoo has expanded considerably over the years and now houses an incredible collection of animals, from native species to white tigers.

If you visit during the spring or summer, the Toledo Botanical Garden offers a beautiful display of flowers and colors.

The summer resort town of Sandusky stretches for approximately 6 miles along the shores of Lake Erie, with a wide range of leisure facilities on its Kelleys Island beaches. Cedar Point is a large amusement park near the city that draws a crowd of families during the summer months. Offshore is the island of Kelleys, on which the Kelley family raised fish in the early 19th century. On Inscription Rock are old Indian rock designs. Further west is Port Clinton, another popular resort.

Canton, located in the heart of the Amish country, has a number of attractions for travelers who choose to stop by. One of the highlights is William McKinley’s Presidential Library and Museum, complete with a science center and planetarium. Canton is also home to the Pro Football Hall of Fame, the First Ladies National Historic Site and the McKinley Monument. The downtown area also has many unique shops and restaurants to pass the time.

The small town of Put-in-Bay has only a small number of regular residents, but in the summer the number swells to three times its normal size. The town is located on South Bass Island and offers many wonderful restored old houses along with restaurants and retail shops. Nearby is the Perry’s Victory & International Peace Memorial which honors those who fought on Lake Erie in 1812 and also to celebrate the spirit of peace between Canada, Britain and the United States. An observation tower offers fantastic views of the islands of Lake Erie. The Put-in-Bay Transportation Co offers tours of the Put-in-Bay area with its Put-in-Bay tourist train in trolley-style trains.