Visit in Aguascalientes– Known for the San Marcos Fair that takes place every year in the month of April, Aguascalientes is a picturesque city in the center of Mexico , with great attractions to visit and discover throughout the year.

It is the central square of the city . It has a nice garden where families will spend their time in the afternoon. Children play with dolls or balloons bought from street vendors and can also make some snacks to eat while enjoying the day.

In the surroundings of the square you can find many shops. The Madero street , recently renovated, is one of the most important.

A few blocks from the Plaza de la Patria is the historic San Marcos Garden , built in 1842. It has a variety of plants and trees and its entrance is decorated with a beautiful portal made of pink quarry. Inside there are fountains, paths through which you can walk and benches to rest. In the center there is a kiosk where musical shows are usually presented.

In front of the garden is the temple of San Marcos and you can also visit the old bullring , still active today.

Between the garden and the temple, in the afternoons, a large number of street vendors selling Mexican snacks are concentrated.

Area of ​​the San Marcos Fair

The San Marcos Fair is held in mid-April each year and at that time the fair area becomes almost impassable in the amount of people there. At that time, the Casino de Aguascalientes was set up and a Palenque where, for three weeks, cockfighting was allowed.

However, even if they do not come for the time of the Fair, this area is pleasant to walk, especially in the afternoons. Between the Temple of San Marcos and the Monumental Bullring, the route is pedestrian throughout the year. Throughout the area there are many large and small restaurants, although at the time of Fair, they open many more.

One of my favorite places visit in Aguascalientes is this beautiful and peaceful garden in the middle of the oldest neighborhood in the city, where the first Spaniards settled. The garden has plants and long-standing trees and is very well maintained. It is ideal for children to play since the entire surrounding area is pedestrian.

To the right of the temple we can visit the José Guadalupe Posada Museum , dedicated to the famous artist, born in Aguascalientes, creator of the character “La Catrina”, icon of the city.

Square of the Three Centuries 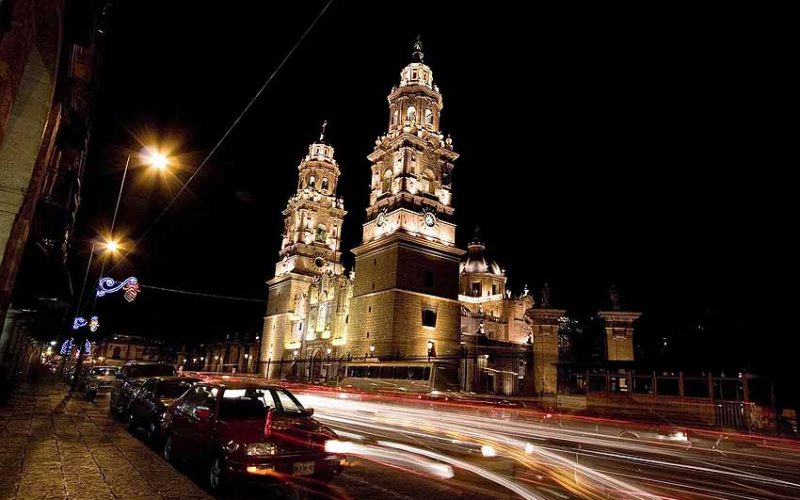 Aguascalientes was once a great railroad center. Unfortunately, today there is little rail movement, which is limited to freight trains.

To remember that past you can visit the railway museum of the Plaza de las Tres Centurias in what was an old station.

You can get to know a huge steam locomotive, go up to very well maintained antique wagons and get to know various old elements of the railway world.

Located in a beautiful building that can be reached walking from the Plaza de la Patria, the Museum of Death contains a wide variety of artistic works focused on this theme so traditional in Mexico .

Death is a topic treated by Mexican artists at all times. In the museum you can find works of pre-Columbian artists to works of our times, including archaeological pieces, clay figures, canvases, paintings and engravings.

If you have more free time visit in Aguascalientes, you can simply let yourself be carried away by its streets, try a michelada , some Antonito in its typical street stalls or a typical Mexican dish in its excellent restaurants. Mexican hospitality never disappoints!

Weekend in the visit in Aguascalientes

The capital of Aguascalientes supports the name of the state and the city with several spas and places to enjoy the hot springs that have made the region famous. One of the most traditional sites are the Baños de Ojocaliente, which date back to the 19th century, whose waters come from the spring of the same name. But the city of Aguascalientes is much more than warm, medicinal waters. It has a magnificent historic center, beautiful parks and a first-class festive and sports program in which the famous San Marcos Fair, the Calaveras Fair, football and motor sports stand out.

Like almost all the central helmets of colonial cities with Spanish heritage, Aguascalientes began with the Plaza de Armas, the Cathedral and the other buildings and spaces that make up a Hispanic city heart. Other places of interest in the center are the Barrio de San Marcos, where the Garden of the same name and the Encino Neighborhood are located. The emblematic places of this neighborhood are the Temple of the Lord of the Encino and the Encino Garden. 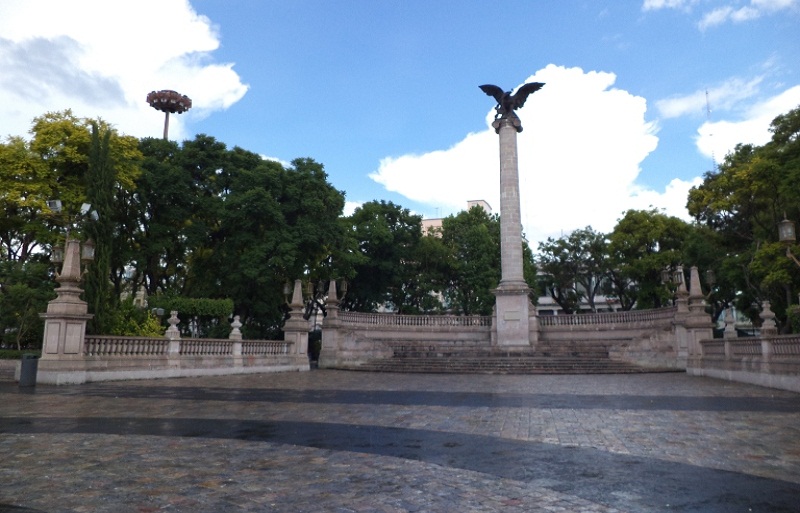 In the first quadrant of the historic center of Aguascalientes is also called Plaza Principal and Plaza de la Patria. On its west side is the cathedral; in the East there are shops, including the building where the old Hotel Francia will operate; on the north side are the Legislative Palace and the building of the former Imperial Hotel; and in the South, the Government Palace and the Municipal Palace. All are places of interest, as well as the Exedra, a monument that symbolizes the central point of Mexico.

Opposite the Plaza de la Patria is this beautiful temple, built during the first half of the 18th century and consecrated in honor of Our Lady of the Assumption. It has two neoclassical twin towers, which are a geographical reference in the city. The main facade is baroque novohispana, pink carved stone, and its interior is neoclassical, with ionic colonnade. The walls are beautifully decorated with vegetal figures.

This majestic building of the city of Aguascalientes was erected between the end of the XIX century and the beginning of the XX by order of the Franciscans. It is one of the religious buildings where it is possible to appreciate more artistic styles throughout Mexico, although it is relatively recent and its construction only took 13 years. To the Gothic, Baroque and Neoclassical styles that usually coexist in delayed construction works, this temple adds Arabic motifs and a bulbous dome reminiscent of Russian architecture. The architectural beauty is highlighted by the different shades of the local stone used.

Visible from several locations in the state and with a peak that rises almost 2,500 meters above sea level, is the natural symbol of Aguascalientes. The residents and visitors of the capital, which is about 10 kilometers away, enjoy the splendid sunsets, which are a symphony of colors on the profile of the hill. The name comes from a legend, according to which an indigenous priest mysteriously disappeared when he bathed in one of the thermal pools. It has beautiful oak forests and part of its extension is protected for the preservation of fauna and flora.

This hydro-calid municipality is in the central-northern area of ​​the state and has several tourist attractions. Among these are the Museum of the Insurgency, the Temple of San Blas and a well in which according to tradition, the priest and leader of the Independence, Miguel Hidalgo y Costilla, stopped to quench the thirst. One of the most beloved characters of the town is the priest Elías Nieves Castillo, better known as Father Nieves, beatified in 1997 by John Paul II. The father has his monument and his annual party in the neighborhood of San José.

It is a Mexican Magic Town. Its most outstanding places are the Church of Our Lady of Bethlehem, dating from the early eighteenth century; the Municipal Presidency, with a beautiful clock from the time of the Porfiriato; the Articulated Christ, with osseous parts of the XVII century; the Museum of Cactaceae and the Cerro de Altamira, the third highest summit in the state of Aguascalientes.

Nothing better symbolizes the city of Aguascalientes than the National Fair of San Marcos, to which people from all over the country and from abroad come. In the also called «Fair of Mexico», the most traditional livestock exhibition in Latin America takes place and the bullfighting poster is of great renown in the region. The typical shows of charrería compete with the mechanical games, in a frame of color, music and culinary delights. The nights are for the big massive musical shows in the Teatro del Pueblo and for fun in clubs and bars. The appointment every year is between April and May. 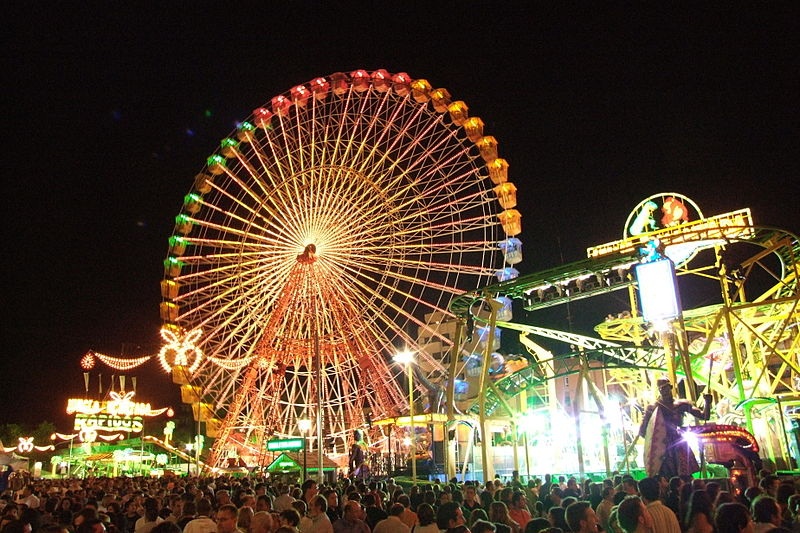 The Festival of the Skulls is another colorful celebration aguascalentense. Its reference dates are November 1 and 2, All Saints ‘Day and All Souls’ Day, so it takes place between the end of October and the beginning of November. It is a mixture of celebration for life and honor and respect for death. The program is very varied and includes traditional events such as the vintage and the traditional market or tianguis, and cultural events, street theater and musical shows. Big dolls carry replicas of skulls as a testimony of death.

The Aqualitans swell fervently for the Necaxa, despite the fact that the club is in the city of Aguascalientes only since 2003. Although most of its laurels were conquered when it was in Mexico City, the hydrocálidos held the runner-up in the Tournament Closing 2016. The Rays play at the Victoria Stadium, with a capacity for almost 24,000 fans, so called by the well-known beer brand of Grupo Modelo.

Due to its location in the center of Mexico, the culinary art of Aguascalientes has been nourished from all regions of the country, incorporating the local touch, mainly through its delicious fruits, such as grapes, peaches and guava. Among the most popular regional dishes are the pozole de lengua, the taquitos dorados and the “flutes”, stuffed with meat or cheese. Fruit juices and sangria are the ideal liquid complement.

Where to change currency in Mexico

Global Exchange Mexico has a network of 32 currency exchange houses in 12 cities of the country, located in airports, ports and hotels in places like Mexico City, Puerto Vallarta or Guadalajara. In Aguascalientes, you will find them at their International Airport .

In your offices, you can immediately change up to 29 foreign currencies in a wide range of hours (even 24 hours in most cases). And if you are a resident of Mexico and want to save, make your reservation through its website to pick it up and pay it at any of its offices in the country. If you are going to travel to Mexico and prefer to change your currency to the Mexican peso  before arriving, visit Global Exchange . With more than 220 offices in 20 countries, they are your best ally when it comes to managing foreign exchange changes.

And if you are already there or plan to change money upon your arrival (or your return home), here we make it easier with a discount of 15% on the margin applied to your change in any of our offices in Mexico.

Finally, visit in Aguascalientes, Mexico there will be those who say that the main attraction of this colonial treasure is the Fiesta Brava celebrated in the Monumental Plaza de Torso. However, the National Fair of San Marcos, the railway, the watches, the guava sweets, the unraveled, the balustrade of the San Marcos Park, the temples, its architecture or its beautiful sunsets are as representative as the Fiesta Brava or its patrimonial and historical wealth. Each day is like a chromatic miracle with its multiple tones that will leave you mesmerized; The warmth of its people makes you feel at home. In short, you can not miss the sunsets of this beautiful city.

Be the first to comment on "What to visit in Aguascalientes, Mexico"