The Santa Ynez Valley, just north of Santa Barbara, is a wonderful Southern California weekend destination. It’s an area full of farms and vineyards, a couple of beaches, a rugged coastline, the occasional launch of rockets. A few windmills, ancient Spanish missions, aebleskiver, ostriches and lots and lots of wine.

What can you say about Solvang, California? It is a city that seems a bit of Europe inserted in the Santa Ynez valley. It has a few different windmills, but none of them are real. It has half-timbered houses, restaurants and colorful shops. It is touristic. To some it will look picturesque and to others it will look kitschy. I have a soft spot for the city as I have had a chance to see behind the facade and meet some residents over the years. There are really a lot of Andersens, Mortensens and Christensens in this city. It may be touristy but its Danish roots are real.

While so many Danes and other Scandinavians settled in the Midwest because it reminded them so much of home. At least one group of Danes remembered that one of the reasons they left home in the first place was the harsh winters. In 1911 a group of Danes moved west and bought nearly 9,000 acres of Rancho San Carlos de Jonata, one of the original Spanish land concessions, to create the city.

There is much more to buy in Solvang than “I love Solvang” or “Proud to be Danish” t-shirts. You can find antique shops, Christmas shops like Jule Hus (Christmas house).At least one charming bookstore (Book Loft), candy shops, art galleries and many souvenir and specialty shops. There are also a lot more wine tasting rooms in Solvang than when I visited as a child. But many shops such as Rasmussen’s or Mortenson’s Bakery have been established in Solvang for many years.

Solvang is full of bakeries where, as they say at Birkholm’s Bakery & Cafe, “Smells are Free”. The baked goods are great for everyone I’ve tried, if not always particularly Danish.

Solvang has a wonderful 700-seat open-air theater, the Solvang Festival Theater. In the summer (in non-COVID years) the theater hosts performances produced by the Pacific Conservatory Theater. Many years ago I spent a beautiful summer evening watching A Midsummer Night’s Dream with friends and family at the theater. The theater also hosts musical performances throughout the year.

Solvang has one of California’s 21 original missions, Old Mission Santa Inés which is located on Mission Ave. Unlike the nearby La Purisima Mission State Historic Park in Lompoc, this mission is still an active Roman Catholic parish.

Solvang has a large number of restaurants due to the number of tourists it receives. On my most recent trip, I ate outside at Copenhagen Sausage Garden, as I can never resist a good brat.

Solvang has a couple of museums that might interest you. The Hans Christian Andersen Museum at the Book Loft bookstore remembers the Danish children’s author who wrote The Little Mermaid. The Ugly Duckling, The Princess and the Pea, and The Emperor’s New Clothes.

For something a little different, visit the Solvang Vintage Motorcycle Museum, which places an emphasis on racing motorcycles.

If you access the Santa Ynez Valley from Highway 101 you will pass through Buellton and for many people this will be their entire experience with this city. This area was also part of the original Spanish land concession, but was bought by the Buell brothers in 1865.

The Pea Soup Andersens restaurant advertises hundreds of miles away on Highway 101 that runs through the city. There were more of these restaurants in California, but now there are only two, including this original one. It has existed since 1924, when it was originally called Andersen’s Electric Cafe. Electricity had finally arrived in the valley in 1924 and Anton Andersen had a newly developed electric stove. It was Juliette Andersen, Anton’s wife, who contributed to his recipe of the pea soup for which the restaurant would become famous. You can purchase her recipe and a bag of split peas at the gift shop if you want to make your own soup at home.

For a more instagramable stop in Buellton visit Ostrichland USA where you can feed one of the ostriches or emus. Ostrichland made a cameo in the movie Sideways and The Simpsons. An ostrich chick may be spotted in the summer or an emu chick in late winter and early spring. You might even spot an emo girl taking a selfie, but that’s another story.

Admission is $ 5 for adults and $ 2 for children with a bowl of ostrich food for an additional $ 1.

If you’re driving north on Highway 101 to reach the Santa Ynez Valley, a great stop north of the Gaviota Tunnel is Nojoqui Falls Park. The name of this unpronounceable park derives from the Chumash natives and apparently means “honeymoon place”. Despite its spelling, Nojequi is pronounced NAH-ho-wee.

You can take a short easy hiking trail a third of a mile from the parking lot to 160-foot-high Nojoqui Falls. In September when we visited the falls they are just a trickle so the best time to see them is late spring. When we were there, the end of the trail to the falls was uncomfortably closed but wasn’t marked until you got there. 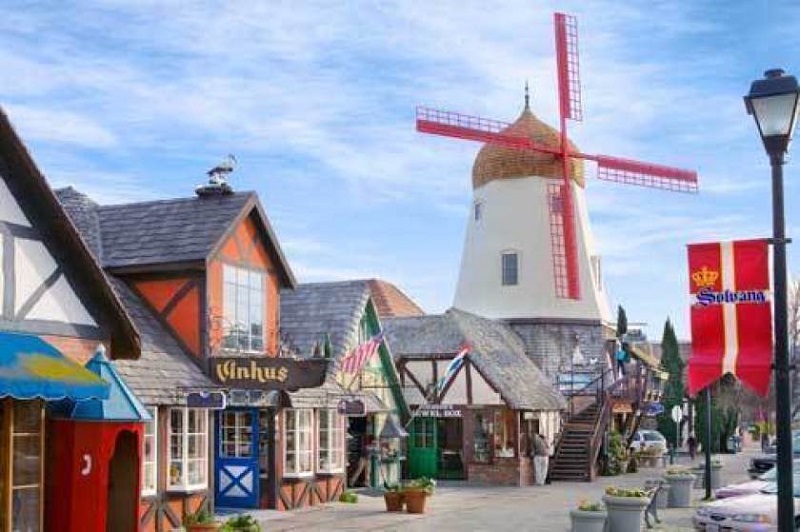 Remember that long before it was known for Danish bread making or wine making. this area was a ranch and the farming culture is still alive and well in the Santa Ynez Valley or at least in the hills around it. Santa Ynez is the valley town where you are most likely to see someone, no irony, wearing a cowboy hat or driving a pickup truck with a hay or two in the back. Note the horseshoes on the zebra crossing in front of the Outpost Trading Company.

If you’re driving into the Santa Ynez Valley from Santa Barbara, the quickest route is Highway 154, the Chumash Highway. Santa Ynez will be the first city you arrive with its 2 main street blocks.

You will get some great views of the valley as you enter from Highway 154. And also pass the Chumash Reservoir which has campsites if you are so inclined. For beach camping, consider Jalama Beach County Park outside of Lompoc.

Lompoc is located just beyond the western end of the Santa Ynez Valley in the Lompoc Valley. If you want to add a visit to the beach, another Spanish mission (dare I say a more interesting one), over 40 downtown murals. A rocket launch or fresh flower fields, you should consider adding Lompoc to your visit. Learn more about Lompoc in Things to do in Lompoc, California.

Be the first to comment on "Things to do in Solvang"