The artist Marta Minujín up a Parthenon in Buenos Aires, Argentina, with 20,000 books that had been banned or censored throughout the history of Argentina ‘s military dictatorship. It was 1983.

Now, the same artist aspires to raise a similar sculpture, a critical gigantic censorship, consisting of no less than 1 00,000 works prohibited throughout history. And a spectacular work that we can visit for 100 days. 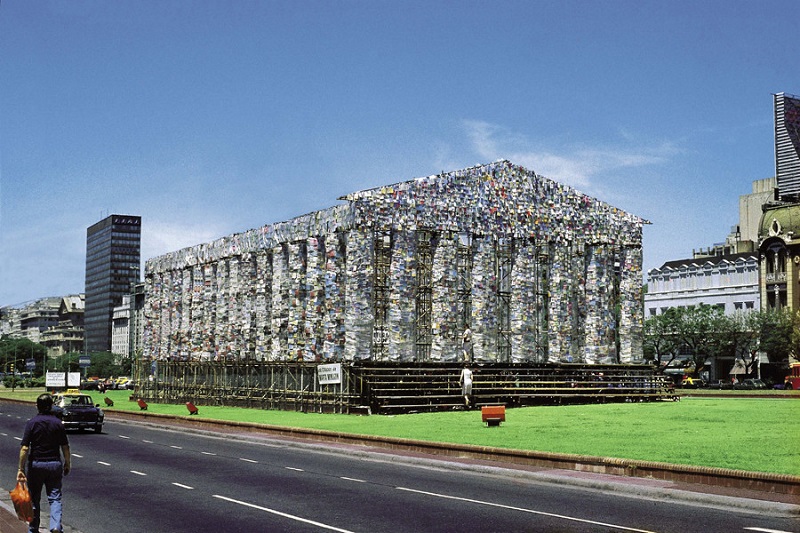 A building made literally from books

The idea is that these books from donations (open to everyone), are prohibited books, either at some point in history or today, anywhere in the world.

The list of prohibited books, then, is not closed. The building will not be inaugurated until June 10, 2017. From that day, it will remain open to the public for 100 days. After that period of time, it will suffer the same fate as his predecessor Argentina: s was demolished and invite the public to collect their remains can.

The installation of Minujín will be constructed as a replica of the temple of the Acropolis of Athens, with its same dimensions (about 30 x 70 meters). Each copy will be placed in an airtight bag and, as a whole, will be hung mesh covering the tubular structure of the work.

You may also like to read another article on NGCATravel: Do you like water parks? This is the biggest in the world

Where can we see it?

The Parthenon of Books will be located in the square Friedrichsplatz, in Berlin, in the same place where the May 19, 1933, the Campaign against the non-German spirit led by the Nazis burned them on a pyre 2000 books.

During an allied bombing in 1941, the Fridericianum, used as a library at that time, was struck by the flames, which destroyed more than 350,000 books. So the place has great symbolism for the books that would destroy the style Fahrenheit 451.

The building is shaped Parthenon chosen because this building is the symbol of democracy in ancient Greece. “Democracy without books is not democracy,” said Minijín in a statement.

Be the first to comment on "In Berlin there will be a Parthenon built with 100,000 censored books"